Hi! I'm Paul. I'm a designer and technologist who specializes in leading cross-functional teams to deliver great products with experiences that go beyond traditional screen-based UIs. I'm not currently looking for new projects, but if you want to connect feel free to drop me a line.

Complex facial expressions on a robot.

With Louise Briguglio and Jason Block

I was project manager, developed the initial facial simulator, came up with the research experiment and designed and built the visualization.

You are having dinner at a restaurant. Your waitress arrives to take your order, asking how you are.

“Great!” she responds with a smile that is perhaps a bit too wide and stiff. You notice a subtle tension around her eyes. You infer that she is not, in reality, great but is masking her distress. Perhaps her boss has just yelled at her or her car broke down on the way to work.

Humans are incredibly adept at interpreting facial expressions. We can even tell the difference between deliberate expressions—expressions that are intentional or acted, such as smiling despite feeling anxious or disappointed—and spontaneous expressions which are unconscious and genuine manifestations of felt emotion (Ekman & Rosenberg 1997).

While most humans are innately talented at displaying and interpreting facial expressions, embodied conversational agents (ECAs) rarely, if ever, achieve the same range or nuance found in human expression.

Tank, an ECA, is a product of the “Roboceptionist” project at Carnegie Mellon University. Tank and his predecessors are social robots with rich and emotional backstories. Ideally, people using Tank will explore his story and feel empathy for his character.

Like many ECA's, Tank is equipped with an expressive face which is programmed to display a wide variety of emotions. The emotion to display at any given moment was determined through a number of factors, including long term pre-programmed "stories", recent conversation history, and the phrase Tank is currently saying. A phrase may be tagged with multiple sequential emotions so that, as the phrase is spoken, Tank's face must quickly switch between several distinct emotions. 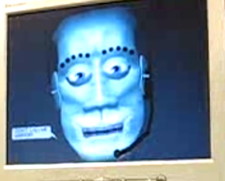 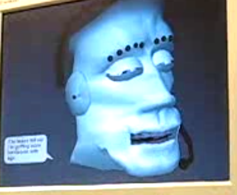 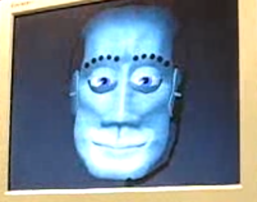 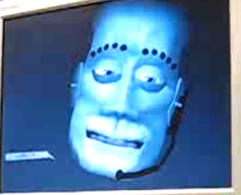 Our team interviewed community members about their feelings toward Tank. While many people found him helpful, some also confessed that they found him “creepy” or “awkward.” Through our interviews, we discovered that much of this awkwardness came down to two things: 1) unnatural-seeming facial expressions and movements and 2) mismatch between the emotions suggested by the spoken text and the perceived emotions.

Given this apparent mismatch between Tank's intended expression and many viewer's receptions, our goal was to understand how we might increase empathy for Tank and other ECAs by exploring how people interpret the expression of complex and nuanced emotion by an animated face. In particular, we wanted to find a way to calibrate a face to make sure emotions were interpreted correctly.

Randall Munroe, the author of the webcomic, xkcd, released a survey asking participants to name a random color displayed on their screen from the RGB color space. He collected five million color names from 222,500 user sessions. By identifying the most popular responses, he was able to draw a map identifying the “boundaries” of each commonly identified color on a two-dimensional plane.

We created a web-based survey that displayed one of the complex expression to the participant. The participant was asked to label the displayed emotion. As of this writing, we have 3,392 expressions were identified from 337 unique user sessions.

We initially visualized our results as scatter plots, as shown below. We highlighted the most popular responses and grouped them with convex hulls to emphasize the spatial clustering of dominant terminology.

Move your mouse around the scatter plot to see the corresponding face.